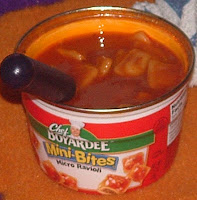 Feeding Noah has always been a challenge. I’ve learned that it can be a challenge with many special needs kiddos for a variety of different reasons.  For Noah, chewing anything that was overly textured was hard so he didn’t like things like spaghetti or rice. It wasn’t that he just wouldn’t eat them, he really couldn’t.

Over the years we’ve had times where Noah was eating pretty good and then times where he was not eating very well. He’s small for his age anyways so at one point years back I feared that the doctors might decide that he would need a feeding tube, but thankfully we were able to get past that without one.

I always hoped that Noah might “outgrow” some of his feeding issues and be able to enjoy other foods and lately that seems to be happening!

It all started a few weeks ago when J was eating one of those little microwavable macaroni and cheese cups around the same time Noah got home from school. Well, Noah saw him eating it and asked for a bite. Noah’s always been interested in whatever J is eating and will often ask for a bite but then spit it out. This time, though, Noah ate the first bite of mac and cheese then asked for more until there was none left! Then he ate two of the little macaroni and cheese cups for dinner.

A few days later we were at the grocery store and he sees the little containers of ravioli in cups and wants one so I buy one thinking he isn’t going to eat it. Wrong! He ate the entire thing!

His favorite thing now is the ravioli which now that we know he likes it and will eat it we have started buying in the big cans as it is more economical than the little cups. He can eat a whole can in a sitting with cheese crackers (his all time favorite food and our “go to” food when he will eat nothing else) for “dessert.”

He’s also ventured into icecream lately– it must have sprinkles!

Hopefully, he’ll remain tolerable to new foods and we can continue to try and introduce new things to him. It’s gotta be better than living on cheese crackers, cheese fries from Sonic, and chicken nuggets!

(Note about the photo: I tried and tried and tried to get a good photo of Noah eating ravioli but he would NOT let me. Every time he saw me with the camera he’d either spit the food out or not take it so I have given up on that for now!)
Posted by Coley at 12:01 AM