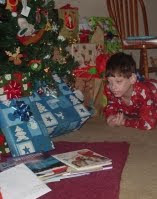 I’ve wanted to come here and write about Christmas for days now but unfortunately I woke up on Christmas Day and felt awful. I had a horrible headache and horrendous pressure in my head which I assumed (and rightly so) was a sinus infection. I felt so terrible that I really didn’t even want to open my presents. It took me forever to open them when I can usually rip through them. I think J was ready to take me to the ER (LOL!) Ya know, I’m definitely sick if I don’t want to open presents!! But, finally I am feeling more like myself again! Despite feeling terrible on Christmas Day, we did have a nice one. It’s always fun and nice to watch Noah enjoying the gifts from Santa and family members and friends. Watching him enjoy everything makes the craziness of the holiday season worth it. 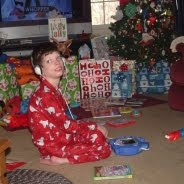 Noah’s favorite gift was probably the Fischer Price portable DVD player with headphones. (The headphones are probably this Mom’s favorite gift! Haha) It is designed for a preschool age child so the buttons are big enough that Noah can work them himself and he has quickly learned how. He got several different new movies and videos to go with the DVD player and although I have offered for him to watch them on the “big TV” numerous times, he has refused and has enjoyed watching them on his new DVD player. He looks so cute in those lil’ headphones! He

also received many books of course. It wouldn’t be Christmas (or any holiday for that matter) without books for Noah! He also received several blankets – a Cars (the movie) blanket that lights up, matching Clemson blankets for him and Noel, and a very very soft maroon blanket that has paw prints (for Mississippi State University) and his name embroidered on it. He got a few dinos, some dino PJs, some small See-N-Says, and a bunch of other stuff I can’t remember at the moment including a new orange and purple stocking filled with goodies. I was pretty spoiled too! My favorite gifts include new tennis shoes (they are brown!!), the audio version of Jenny McCarthy’s new book Mother Warriors (thanks Brother!), and a massager thingie. (I really don’t know the name of said massager thingie but you can either sit it in a chair or you can lie on it on the bed and it massages your head, neck, back, and legs. It has heat too!)

J was also spoiled receiving a new Wok set, a big huge chopping knife which I’m not allowed to touch until my eyes are better, and several different Clemson things just to name a few items off the top of my head. Behavior wise, Noah did well aside from a little fussiness mainly towards the end of the day. By the end of the day I think he was just ready to get home. He was pretty fussy at Mom and Dad’s and pretty fussy in the car, but once home, he drug out most of his new toys in the living room and played by himself while J and I unpacked, put things away, etc.

Material gifts aside, it was nice to spend the day with my family and it was great to have my brother home and spend time with him. He and Noel hit it off – I’m surprised he didn’t try to sneak her back home with him! I hope that each of you had a peaceful Christmas!
Posted by Coley at 6:03 AM No comments:

We are off to spend the evening at my parent's house just as we do each year. I think that Noah thinks Santa will miss him if we aren't my parents!! I've mentioned staying home and going over there on Christmas Day but nope, he won't hear of that! I do enjoy it though. We go to the Christmas Eve church service and then go back to my parent's house and have appetizer/snack type foods. Then we usually watch some type of Christmas movie - I think it's been Elf the past two years and then it's off to bed!

I leave you with this year's Christmas card. I designed it myself and am pretty proud of it. I made three different ones before this one and they just didn't say "us" to me. Then finally, when I was finished this one, I knew I had captured us. 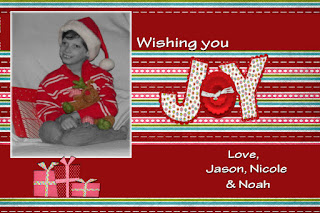 Hung by the Chimney

I love our stockings. We don't have the traditional red and white stockings that many people have, our stockings are each unique and fit our personality.

Until three years ago we had the traditional red and white stockings and then for Christmas, Santa brought me a new stocking that totally fit me. It's a pink high heeled shoe and says "Princess." I just love it!

So after receiving that stocking, when Christmas rolled around the next year I was on a mission to find stockings that were unique for Noah and J as well. We ended up with a Superman stocking for Noah and a Clemson stocking for J, both found on ebay. 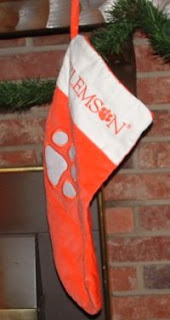 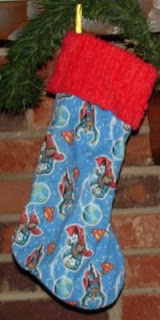 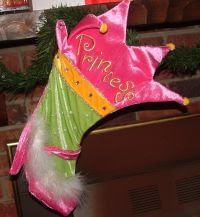 My little (ok, tall but younger) brother, Andy, is having surgery for a deveiated septum today. My parents have driven down to where he lives (a few hours away) to be with him for the surgery. We sent him a card with the picture below. Keep my bro in your thoughts and prayers today, please! 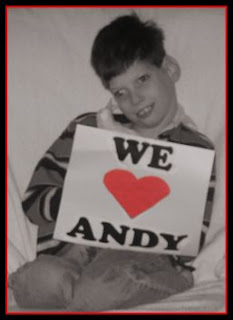 Update 10 PM – When Noah talked to my parents a bit earlier, Andy was at his house drinking 7 up and lounging on the couch.

As the mom of a special needs child, I'm always on the lookout for disabled people and their disabilities being highlighted in positive ways. I love for the general public to be able to see the disabled in a positive light. There is one new holiday commercial that I am just in love with at the moment as it features signing, commonly known as American Sign Language.

This commercial is for Kay’s Jewelers and features a young couple by a Christmas tree. The young man of the couple begins to sign and speak and says (to the young lady) that he isn’t very good at signing yet but he is trying. She signs to him and the captions on the screen tell us that she says he is doing just fine.  Then, he tells her (in sign language of course) that he learned a new sign today and he signs “Merry Christmas.” And then he hands her a Kay Jeweler’s box. She opens it and inside is a beautiful silver watch. He then asks her if she likes it and she signs “Read my lips” and then lays on a big smooch.

This is one of those commercials that leaves you feeling warm and fuzzy and it makes me proud that it is a commercial featuring something considered to be a "disability."

Check out the commerical here - you won't be sorry!
Posted by Coley at 12:48 AM No comments: