I've noticed that people have been coming to this blog using the search engine tag "children with cerebral palsy" or something to that effect. I thought it would be good to create a page here for those people so that you can easily find out information about cerebral palsy as well as how it affects my son.

But first a little disclaimer… I am attempting to put what I have learned about cerebral palsy over the years into laymen’s terms but please keep in mind that I am not a doctor, a nurse, or a trained professional who deals with cerebral palsy. I’m simply a mother wanting to educate others about her son's condition. For more information on cerebral palsy, check out the United Cerebral Palsy organization.

What is Cerebral Palsy? (I will refer to Cerebral Palsy as CP from now on.) CP is a condition caused by injury to the brain resulting in loss of oxygen right before, during, or after birth. More and more often, CP is being linked to negligence on the medical professionals part. It can often be very common in premature babies as well.

How many children have CP? According to UCP, about 8,000 babies/children are diagnosed with CP each year.

Does the condition get worse over time? No! CP is considered a "static" condition - meaning it does not get worse. With therapy and hard work, people with CP can overcome their obstacles.

Since each child with CP is different, I thought I would take a moment and walk you through how CP has affected Noah. Eager to see the world, Noah arrived 6 weeks early weighing 4 lbs and 12 oz. After I was given the epidural, he lost oxygen which resulted in CP. We did not know he had CP at the time.

Noah was a happy baby, but we did begin to notice that he was not on target with some of his milestones. At about 8 months old, a CT scan was done and it was then determined that Noah did have CP. 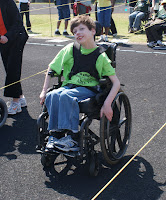 Noah had surgery at Shriner's Children's Hospital in November of 2002 to lengthen his heel cords and to put steel plates in his hips. Theat helped some and for awhile Noah was able to walk short distances in a walker but his main mode of mobility is his wheelchair, which he is pretty good at it - so watch out, he will run ya over!

In January of 2010, Noah was diagnosed with Scoliosis and had a 96.3 degree curvature of his spine. In May of 2010, Noah had a steel rod surgically implanted into his spine. After a long recovery, Noah is now sitting up straighter than ever and his curvature is only 11.9 degrees.

Noah's speech is also delayed by CP - although he comprehends and understands so much! He is now communicating with sign language and a communication device. Noah goes to a very good local school for children with special needs. He is in a class room setting, but receives occupational, physical, and speech therapy and learns life skills at school as well. He is doing well in school and enjoys school - especially riding on the school bus! 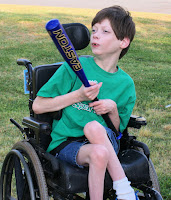 Noah continues to amaze us with his zest and love of life. Noah is a very happy and loving boy who enjoys making others smile and laugh by doing silly little things. He plays Miracle League baseball (baseball program for children with special needs), loves the Clemson tigers, and enjoys reading and going places.  He is a curious learner and a bit of dare devil at times - especially when it comes to roller coasters.

Many people often ask if we know why or what caused Noah's CP. After an attorney initiated an investigation as to what caused it, I firmly believe that Noah's CP is the result of  my reaction to the epidural and the doctors not responding quick enough (such as performing an emergency c-section) to that reaction. Regardless of why or how CP became a part of our lives, it is and we strive to give Noah the best opportunities and life possible just as we would if he did not have CP.

People have asked me if I wonder what Noah's life would be like if he did not have CP, but that is hard for me to imagine. Noah is who he is - CP and all.