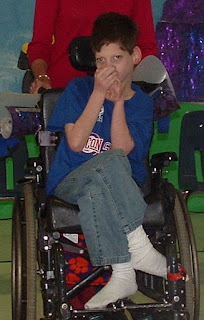 The Spring Pep Rally and Assembly was held at Noah’s school today. We had been invited by the school a few weeks ago because Noah had been selected as the Terrific Kid for his class and would be presented with an award.  Each teacher nominates one student from her class who has done well in school, has improved, has good behavior, and gets along with his/her peers. We were very excited that Noah was chosen as the Terrific Kid of his class. He has come such a long way since the beginning of the school year.  So of course we were going to be there and see Noah honored as a Terrific Kid. The guidance counselor at the school gave a little speel about what it means to be a Terrific Kid and how it all works. I wasn’t aware of this part until she explained it but apparently the staff at Noah’s school vote and then select an overall Terrific Kid for the different divisions at his school.  They had chairs up front for each of the Terrific Kids to sit in when it was time to be recognized. They left blank spots for the students in wheelchairs and J had already spotted Noah’s spot with his name taped to the floor. Finally it was time to bring in the Terrific Kids. Noah’s name was called first and he made his way to his spot amongst the cheers and applause. Apparently, he loved the cheers and applause because he kept signing that he wanted more applause! After each child’s was recognized it was time for them to announce the Terrific Kid for the entire elementary division.  Yep, it was our No-No!!! My Noah is the Terrific Kid of the entire elementary division. That’s big stuff for this little boy! J and I were so proud.  After the assembly was over, teachers and some of Noah’s friends were coming over to him congratulating him. He was eating up all the attention.  Of course we already thought Noah was a Terrific Kid but we are sooooo proud of him to receive this honor! 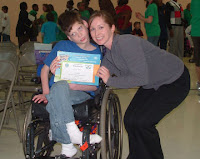 Noah with his teacher, Ms. Allison 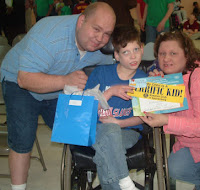 J and I posing with our Terrific Kid 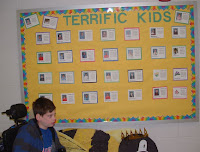 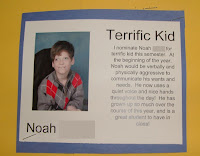 There is a bulletin board in the hallway listing all of the Terrific Kids for each class and it has the little write up that each teacher turned in when she chose the Terrific Kid for her class.